The contemporary art world can be fickle, narrow minded, skewed towards youth and notoriously cliquey. Artists don’t always garner opportunities on the merits of their work. The quality of the art matters, but like any business, who you know, your pitch, and getting noticed by the right people can make all the difference. If you’re an artist with a disability, it’s even more challenging to be seen and heard in a saturated marketplace.

As Gallery Director at NIAD Art Center it’s my job to shine a light on the work produced by sixty-five artists with disabilities in our studio that aren’t capable of self-promotion. Through exhibitions, marketing, the gallery store, website and networking sometimes these artists get well-deserved attention, but often it takes an outside ambassador for the work to gain broader exposure.

Last spring Larry Rinder, the director of the Berkeley Art Museum and Pacific Film Archive (BAM/PFA), informed me he was co-curating an exhibition called Create with Matthew Higgs, the director of White Columns in New York, featuring art from NIAD, Creative Growth and Creativity Explored. All three organizations reside in the Bay Area, have a similar mission and were founded by the same pioneering couple, Elias and Florence-Ludens Katz. 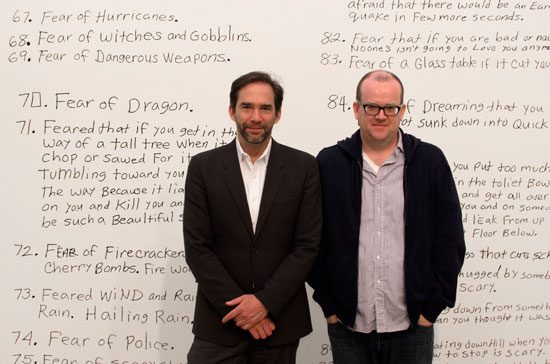 Both curators fell in love with the art produced at Creative Growth and Creativity Explored when they lived in the respective neighborhoods years ago, downtown Oakland and San Francisco’s Mission District. Since then they’ve placed art from those programs in exhibits around the country and some of the artists are now widely collected and exhibited.

NIAD’s been blessed with great ambassadors and successful artists, but it’s remained below the radar of many art world institutions and collectors for a variety of reasons. Our location and smaller size likely play a role along with a lack of serendipity. As I mentioned before, sometimes having the art in the right place at the right time and seen by the right people can yield results.  The BAM/PFA exhibit could play a huge role in garnering more notoriety for our artists and organization.

Create opened at BAM/PFA on May 11 and will be on display until September 25, 2011. Then the show will travel for two years with help from Independent Curators International, which is currently promoting the exhibit to institutions around the country. A gorgeous catalog also accompanies the show. It contains an essay by Larry Rinder, short bio’s about all twenty artists and images of the featured artwork (I photographed NIAD’s artwork).

Four NIAD artists were selected to participate in the show: Attilio Crescenti, Marlon Mullen, Willie Harris and Jeremy Burleson. The first two no longer work in our studio. Crescenti passed away in the late 1980’s and Mullen left the program about 5 years ago. Burleson and Harris both currently work at NIAD five days a week. 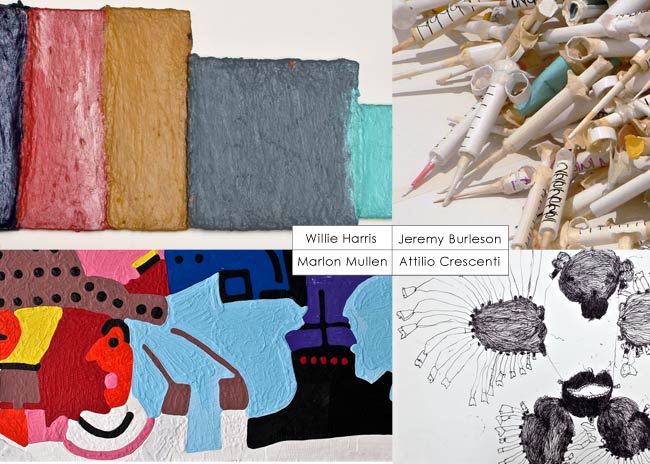 Crescenti’s residence at NIAD was brief, about 8 months. During that time he created an elaborate set of pen and ink drawings of human like heads with an exploding array of appendages, which appear to be arms, hands and fingers. They’re mesmerizing in their complexity and symbolism.

Marlon Mullen was a painter who moved from representational images of bridges and ice cream cones to complete abstraction. He would rip photos from magazines and would completely deconstruct them into their simple and essential elements using vivid color and loose brushstrokes.

Willie Harris has been working at NIAD for around twenty years and his work has revolved around the same set of images and basic forms. He’ll either draw the same house or human figure, or he’ll paint circles or heavily encrusted color field paintings using emphatic brushstrokes that are minimal and sculptural in scope. The latter set of work is on display in Create.

Jeremy Burleson’s work might be the most unique of the group. Using only paper, tape, glue and the occasional found object, he creates medical instruments, handcuffs and lamps. The objects are closely tied to memories and experiences that he wants to recreate.

I attended the press preview earlier this week and the experience was extremely gratifying. The range and quality of the work is impressive and listening to Rinder and Higgs passionately talk about the art filled me with pride. For example, Higgs felt Mullen’s work is the best painting he’s seen in five years.

All of the featured artists deserve broader recognition and acceptance by the art world. Not simply due to its occasionally bizarre nature, but because it’s on par with mainstream contemporary art. It’s just as intriguing, well made and captivating. Therefore, it should no longer be considered Outsider Art; a term used to define art created by isolated self taught artists whose work is not part of the artistic establishment.

This is no longer the case. These artists work in rich, vibrant communities, creating artwork that is just as vital and important as able-bodied artists who toil away in private studios. In addition, several of the featured artists from the other programs are part of the art historical canon. The BAM/PFA exhibit acknowledges their legitimacy and will hopefully overturn many of the entrenched misconceptions and stereotypes about their work.

If you live in the Bay Area be sure to check out the show. If not, hopefully it will travel to a museum near you.

Here’s a short video I made several years ago of Jeremy Burleson making a paper syringe.