A Beer for Hope

The Craft Beer industry is brimming with collaboration. Every month expertise and resources are being funneled into joint productions of beer that strive for originality using exotic ingredients or obscure brewing methods. The results are often stunning and beer geeks are left clamoring for these limited releases, but their taste buds and the brewer’s bottom line are not always the sole benefactors.

Four years ago a brewing partnership called REUNION – A Beer for Hope was formed between Alan Shapiro of SBS Imports, Pete Slosberg, creator of Pete’s Wicked Ales, and Virginia MacLean. They joined forces to raise funds for the Institute of Myeloma & Bone Cancer Research by crafting a unique beer on an annual basis with all the profits going to charity. Their friendship was formed during the launch of Pete’s Wicked Ales in the late 80’s, but it was Maclean’s battle with complications from Multiple Myeloma in 2006 that spurred this special project. Unfortunately, just after the initial release of REUNION 2007, MacLean passed away, but the project carries on with over $130,000 raised in her memory to date. 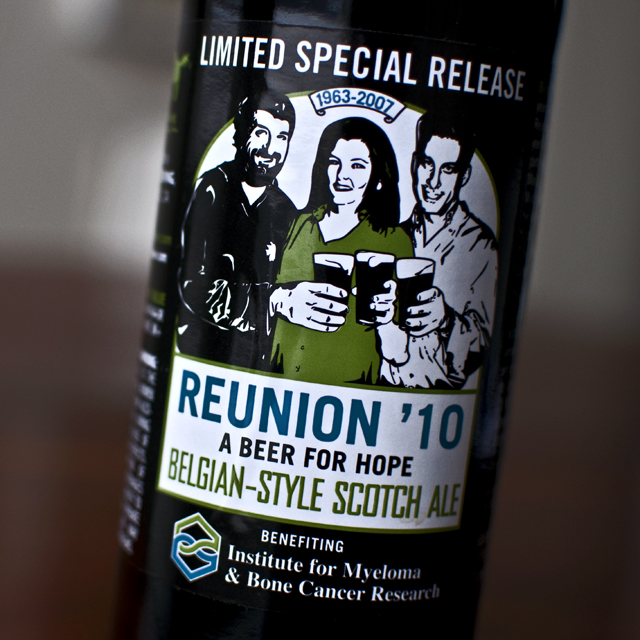 On Tuesday, City Beer Store in San Francisco hosted a party celebrating the release of REUNION 2010 with all tap sales of the beer going to charity. This year’s installment is a Belgian Style Scotch Ale produced by Dan Del Grande of Bison Brewing, Spike Buckowski of Terrapin, and Pete Slosberg. If the style seems a little odd, that’s because it’s a nod to MacLean’s Scottish heritage. Five different malts were combined with East Kent Goldings hops from the British Isles and Trappist yeast yielding an alcohol by volume of 7% and 35 IBU’s. When poured the beer is dark amber with a faint white head. The aroma and flavor is filled with rich malt, spice, a trace of hops, and a sour Belgian finish. You can find the beer in 22 oz bottles in 14 states: New Jersey, Pennsylvania, Alabama, California, Oregon, Washington, Florida, Colorado, Minnesota, North Carolina, Georgia, South Carolina, Virginia, and Tennessee.

Dan Del Grande from Bison Brewing and Pete Slosberg were on hand for the event talking to customers and enthusiastic supporters. I admire this initiative and hope more Craft Brewers will unite behind a cause to support their community while creating the next great beer. If you reside in one of the aforementioned states go out and buy a few bottles.  If not you can go to www.reunionbeer.com to learn more about the initiative and donate a few dollars. 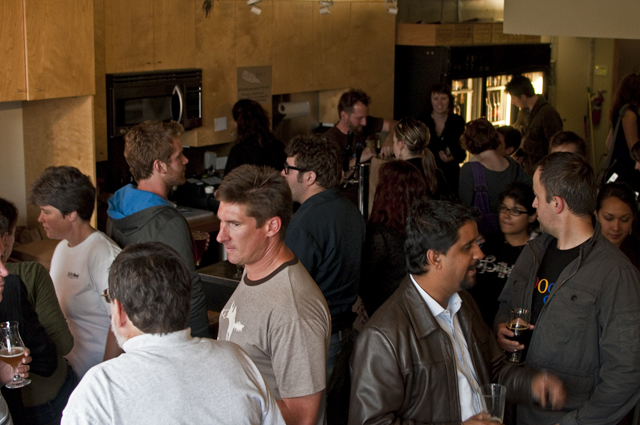 On a different yet related note, I spoke with the co-owner of City Beer Store to get his perspective on the new “mitigation fee” (tax) the San Francisco Board of Supervisors wants to impose on the sale of alcohol at the wholesale level. Under the plan distributors will be charged a nickel per drink and businesses fear this extra cost will be passed down to them via markups, which will lead to higher prices for consumers per drink in excess of five cents. Craig told me the impending tax has put the brakes on his plan to hire an additional employee and will likely prevent him from hosting charitable events like REUNION 2010 in the future.

With tight margins and a tough economy this tax will slow down the recovery and make it even more difficult for small businesses to grow. You can learn more about the tax by visiting the California Alliance For Hospitality Jobs and furious citizens should protest by contacting your local supervisor via e-mail at Board.of.Supervisors@sfgov.org