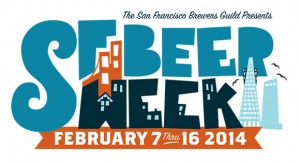 SF Beer Week 2014 recently came to end, and part of my promotional efforts includes the occasional interview. Scott Mansfield of 7x7SF reached out to me before the week got started and published Brian Stechschulte Gives the Lowdown on SF Beer Week 2014. I talked a little about the SF Beer Week Opening Gala, the annual collaboration beer made by the SF Brewers Guild, and offered some advice about events and how to navigate the week.

“It looks like there are more events outside of the city proper than in years past. Is there more interest outside SF, or are you expanding the geographic scope of SF Beer Week?

We’ve never really defined the geographic scope of SF Beer Week, so the expansion you’ve noticed is really just a part of the natural growth that’s occurring in the industry, especially in the suburbs. More bars and restaurants are serving craft beer. Some are brand new, while others are waking up, so to speak. I’ve received several emails from bar owners or their employees telling me that they just converted their draft selections to craft beer, or added a whole bunch of new taps, and want everyone to know during SF Beer Week. That’s really exciting, because SF Beer Week is really about the entire Bay Area community and promoting all the good things that are happening here, so everyone who loves beer or works in the industry benefits.”