A Visit with Alex Ganum at Upright Brewing

It’s been two months since I returned from my Pilgrimage for Oregon Beer and sadly its time for the fifth and final post about the trip. My last stop in Portland was a visit with Alex Ganum, owner and head brewer of Upright Brewing, who specializes in farmhouse ales.

Originally from Michigan, 30-year-old Ganum grew up on Bell’s Porter and started out as a homebrewer. His passion for beer snowballed into an internship at Ommegang, a three-year stint at BJ’s Restaurant and Brewhouse, and then he opened Upright in March of 2009. The name of the brewery stems from his love of Jazz and the great Charles Mingus, who played the upright bass (see video below).

“I sell or trade a few cases each week, but driving traffic to the tasting room is the goal.” I first met Ganum at the Saturday morning Farmer’s Market on the campus of Portland State University. We had agreed to meet at the brewery afterwards, but I wanted to see Oregon’s bounty. Purveyors lined the sidewalk of the campus green under a canopy of music filled trees. Ganum was pouring samples of a new lager wrapped in a label featuring The Clash. 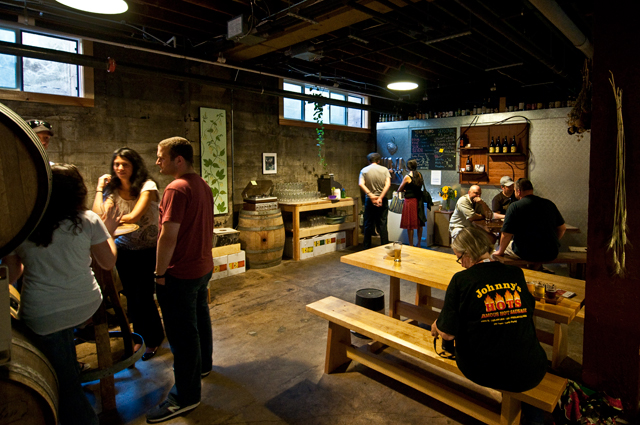 Old vinyl spins on a high-def player at the tasting room and brewery located in the basement of the historic Leftbank Building. The space fuses rustic charm with industrial might. Guests surround high tops made from old barrels or rest at picnic tables. If the crowd overflows, no problem, folding chairs in waiting offer guests a window view of the open top fermenters. No lines are drawn between pub, brewery or lab, which occasionally makes Ganum nervous, but the ambiance is worth keeping. 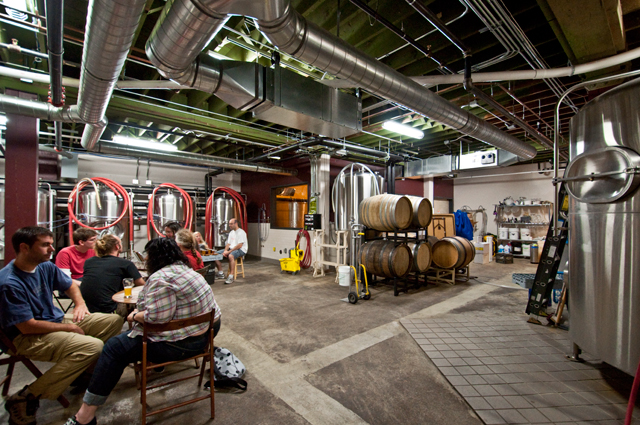 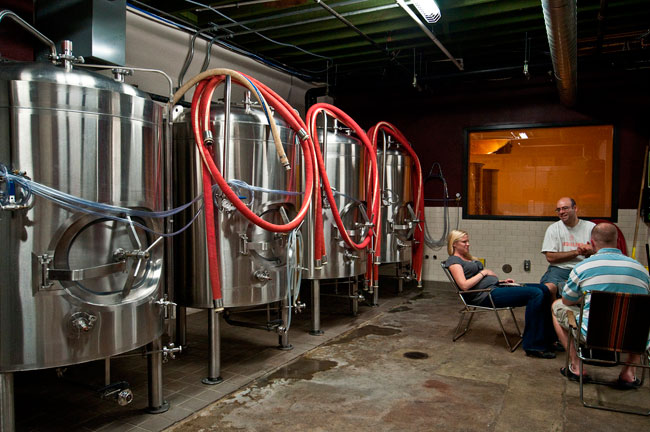 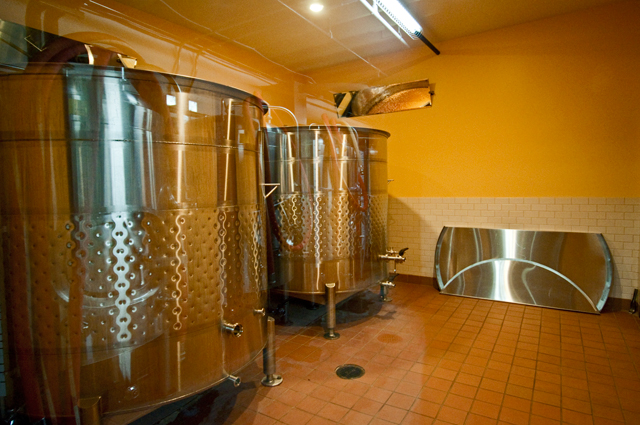 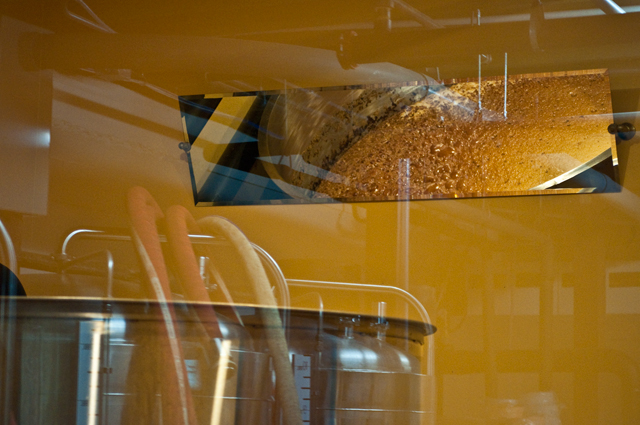 Upright’s year-round beers are succinctly called Four, Five, Six, and Seven, in reference to their starting gravity, a Belgian degree measurement of the pre-fermented wort. It’s “a nod to the days when breweries solely distributed to their respective neighborhoods with nothing but a number on the cap to distinguish the beers – a time before the overly branded, packaged and global products of today.” My favorite is Seven. The French yeast (pitched in all four) gives it a nice barnyard whiff that plays nicely with the lemon, orange, and pepper overtones. 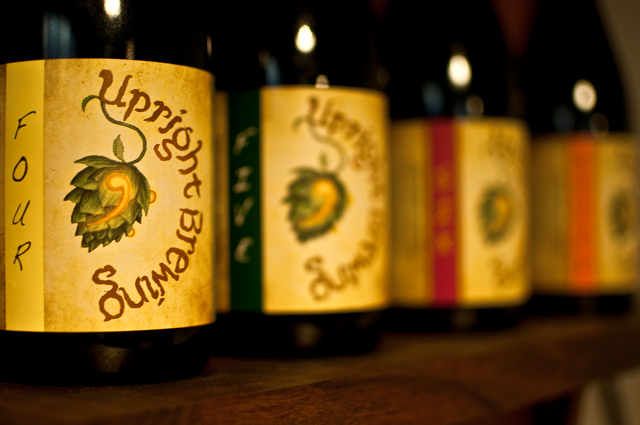 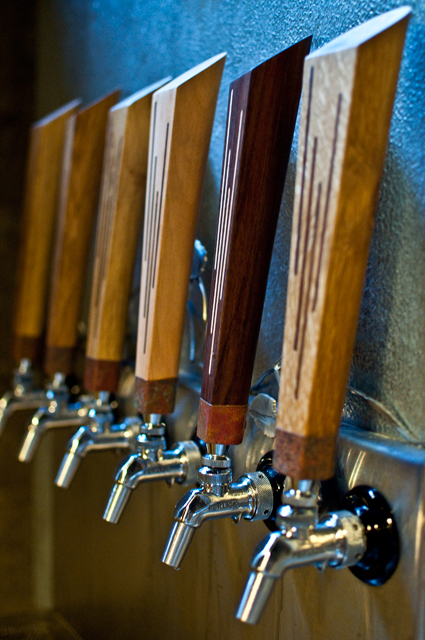 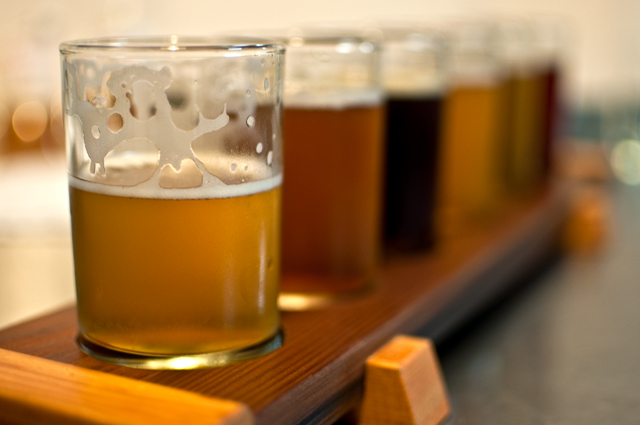 Depending on the time of year Upright also offers nine seasonal beers and one-off barrels at the brewery, when more unusual ingredients surface. Salt, oysters, and Tasmanian peppercorns find a home in pinot, oak, and even gin barrels that climb in some cases to 7% or 9% alcohol. Nearby Willamette Valley is a great source for wine barrels. 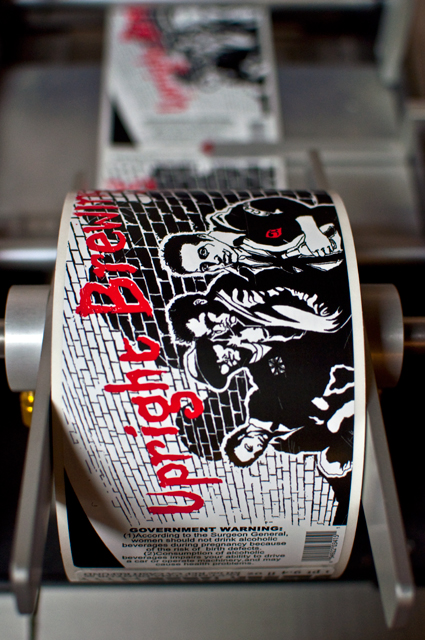 At the moment you can only find Upright beer in Oregon, Seattle, and Vancouver BC or get it through the mail from Northwest Liquid Gold. Even with success, Ganum’s not in a hurry to expand so distribution will remain limited for the time being. I did my best to convince him Upright Brewing’s next great step is the Bay Area.