This year’s event took place at the Grand Sierra Resort and Casino on October 9, 2010, and featured 27 breweries. The competitive portion was conducted by three BJCP certified judges and homebrewers from Reno who selected winners from five style categories: IPA, Dark Ales, Lagers, Pale/Amber, and Other Ales. The categories were condensed due to the number of participating breweries and a minimum of eight beers was required for each group. Fifteen gold, silver and bronze beer cans were doled out at Buckbean Brewing the prior evening and several breweries won multiple awards. Tall Grass Brewing took home three while Oskar Blues, Four Peaks Brewing, and Maui Brewing received two each. Best in show was bestowed on Four Peaks Brewing for their Sun Kolsch. You can find the entire awards summary below.. 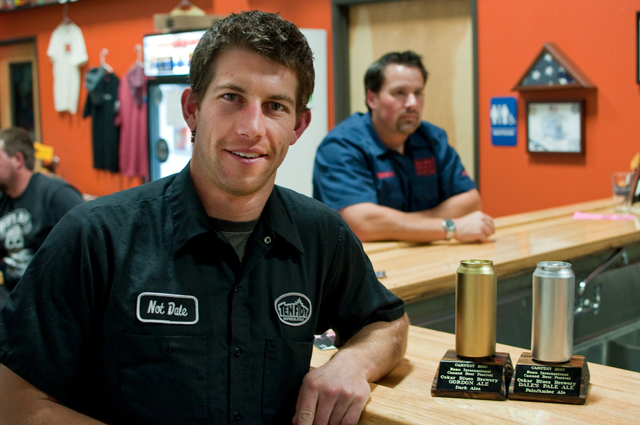 Jeremy Rudolf from Oskar Blues with their gold and silver trophies. 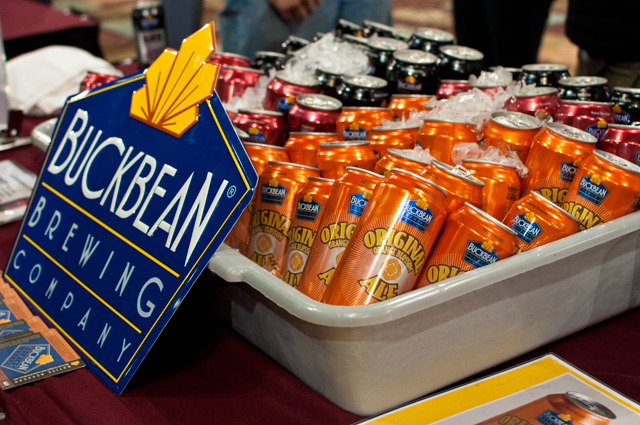 FYI – Did not submit their beer for judging.

The doors were open to the tasting event from 6-10pm and for $35 each attendee was given a four-ounce glass and access to unlimited samples. A portion of ticket sales was donated to the Nature Conservancy and the Great Basin Bird Observatory. The breweries were arranged in a giant rectangle across the ballroom floor along with sponsors and several food purveyors. Overall attendance was a little light, due in part to the University of Nevada football game going on across town; however this allowed for short lines and more time for brewers to connect with enthusiasts. On several occasions I found myself waiting behind long-winded conversations about particular beers. 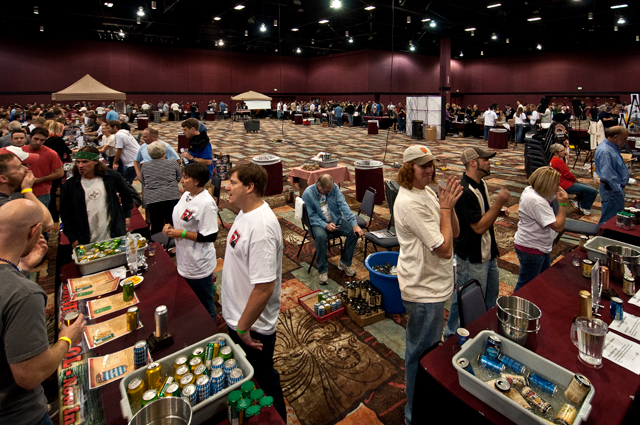 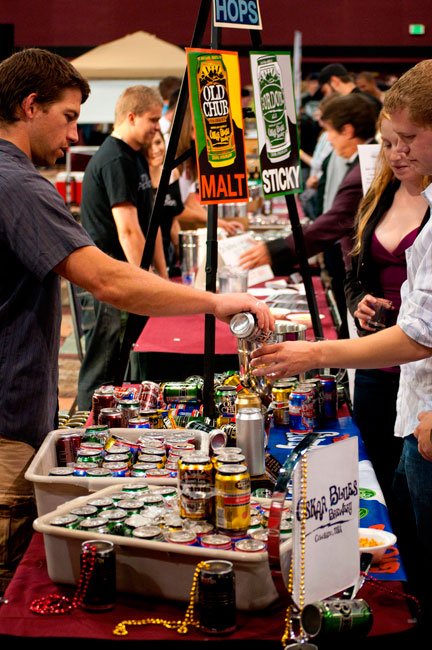 The beer was dispensed entirely from cans of course and I didn’t hear any gripes from the crowd about taste or quality. The only complaints I heard were about booth volunteers pouring more foam than beer on occasion, but overall things went very smoothly. The biggest lines formed around Oskar Blues and Tall Grass Brewing. Maui Brewing’s Coconut Porter was a hit along with Moose Drool from Big Sky Brewing. No surprise there. My personal favorites included two Scottish Ales, Kilt Lifter from Four Peaks Brewing and Old Chub by Oskar Blues. I also enjoyed the Oasis Ale from Tall Grass. Its a Double ESB infused with a boatload of hops topping out at 93 IBU’s and 7.2% ABV. I guess I was in the mood for beer that packed a wallop.

CANFEST will cast a wider net every year as growth continues in the sector. Organizers face distribution hurdles, but the pool of invites is growing. Seventy microbreweries currently can their beer and the number could grow by a third or more this year.

As a result, CANFEST should become more dynamic, competitive, publicized and well attended, but it alone won’t completely dispel the can’s dubious reputation. More festivals designed around the can need to take place throughout the country. The perception of cans also needs to change industry wide. Large microbreweries need to make the shift. Their brand power and widespread distribution would alter far more minds in a shorter amount of time then a collection of small regional breweries. Some have already invested in fuel cells, solar panels and biomass reactors to reduce their environmental impact and cut costs so canning is the next step.

I suppose some brewers think it’s hard enough converting the masses to craft beer, but most Americans don’t have a problem with beer in a can. In 2009, can sales reached 51.4%. In the meantime, small breweries are left to drive change.  If growth remains steady canned craft beer will eventually reach a tipping point and CANFEST could become a marquee event. 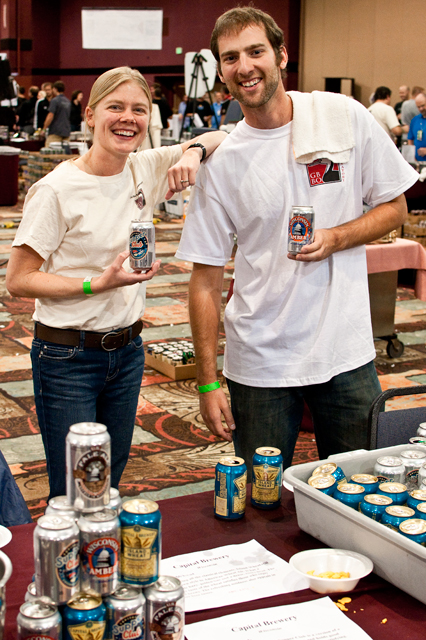 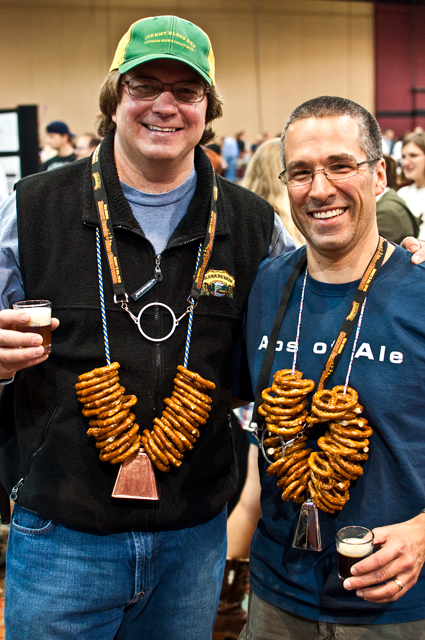 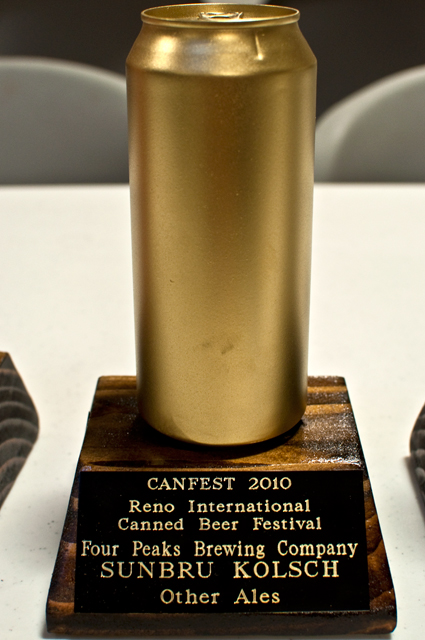 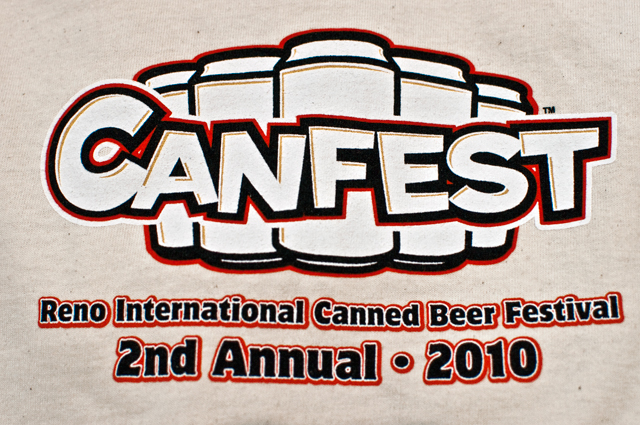