Do you aimlessly wander the beer aisle searching for something new and interesting? It’s easy, especially if you don’t have a craft beer encyclopedia in hand. Some stores are packed full of options. I’ve been known to spend 20 minutes staring at a cooler. Yeah, I have my standbys, but when I’m in the mood to explore the unfamiliar I’m very indecisive.

Subconsciously, label design has always played a role in my choices. I’m not alone. We need some way to sort our options and label style, which is hopefully trumped by substance, is a factor. A beer label can communicate a lot of information. In addition to type and flavor, the label conveys a brand’s personality, history, and good artwork can even tell a story.

A new label caught my eye last month on a can of Fireside Chat by 21st Amendment in San Francisco. It’s a deceptively humorous nod to Franklin Delano Roosevelt’s series of radio speeches that began in 1933 during the Great Depression. The chats were designed to sooth the countries mood as he appealed for the passage of his legislative agenda. Thirty speeches were broadcast over eleven years and listeners applied enough pressure on legislators to pass many of his measures.

The Fireside Chat beer label depicts a relaxed FDR smoking a cigarette and holding a goblet of beer by the fire. At first glace its a straightforward depiction until your eye traces the garland across the fireplace to a chair occupied by a tiny set of stockings and curly toed shoes. If FDR could meet with world leaders why not elves? Judging by FDR’s expression I’d like to imagine he’s letting the elf know whose been naughty or nice. Presidents are always ripe for humor and this is a good-hearted laugh. 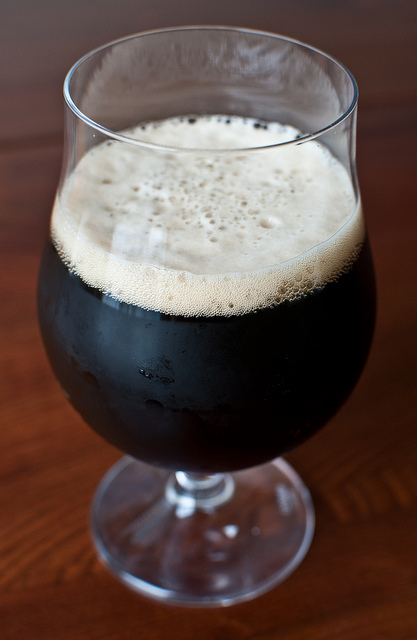 I love the historical reference, particularly in relationship to the countries current state of affairs. Unfortunately, we’re hard pressed to find a contemporary FDR, but at least we can still romanticize the era on the side of a beer can. I also appreciate the labels subtle holiday theme. Christmas beers are often filled with cliche’s so it’s nice to see some smart restraint.

As for the actual substance of the beer it’s a delightful winter warmer. It pours a deep ruby brown and the aroma is full of spice, a hint of chocolate, and it’s a little nutty. No single element overpowers the nose and the hop presence was minimal. As for the mouth feel its fairly light and the flavor is fruit forward, nearly dominating the chocolate malt, but it works. Some sort of berry must have been part of the blend. One surprise at the end was the dry finish. Unlike many winter beers, it’s very drinkable. It’s not overly sweet and rich so a six-pack won’t last long. I suspect it won’t be one of my favorite winter beers, but it was a great start to the season.

Listen to the first FDR Fireside Chat on this YouTube audio clip. Ironically, the topic is the banking crisis of the 1930’s. Sound familiar?

P.S. Special thanks to 21st Amendment for providing an image of the label and a sample of the beer.