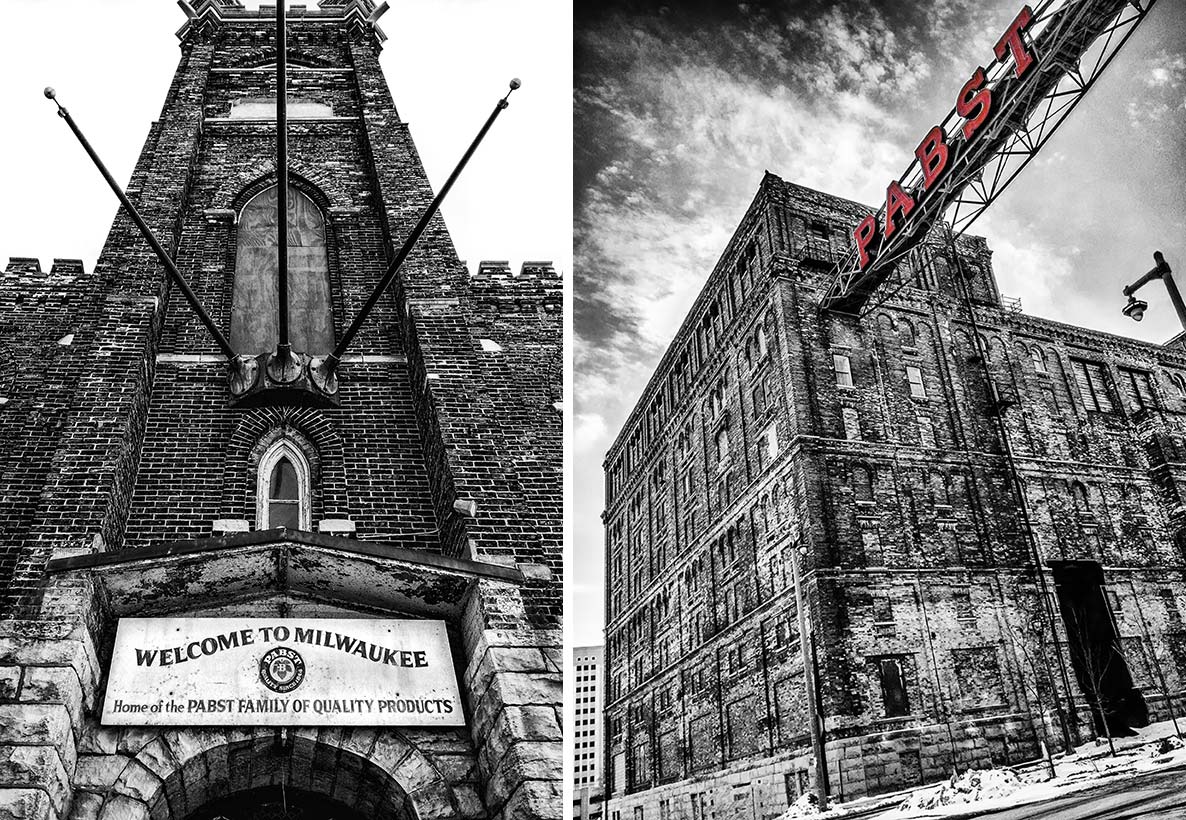 Rich in brewing history, Milwaukee is a wonderful place to drink and explore. I did just that on a recent trip. My time was brief, just the weekend, but I went on a tour of the old Pabst brewery complex. I love brewing history, architecture, and art, and wasn’t disappointed.

The brewery was founded in 1844, and by the time it closed back in 1997, occupied 28 buildings and stretched over 7 city blocks. In it’s heyday, Pabst employed 5,000 people. Many of the surviving structures were built during the Victorian era in the Romanesque style, and brewery architecture from this period is pretty scarce. Somehow Pabst managed to escape the wrecking ball.

Now the entire facility, and surrounding neighborhood, is slowly being restored and revitalized. A boutique hotel occupies the old brewhouse, where the only original equipment remains. The yeast building is now home to the UWM School of Public Health. The bottling department building will be international student housing, and the malt house is slated for apartments. This is just a handful of completed and planned projects.

My history lesson and tour was provided by Best Place, which owns and operates a gift shop and rental halls within the historic Pabst offices, where I spent most of my time. The organization isn’t affiliated with Pabst. The owner is a brewery historian focused on historic preservation.

Thankfully, much of what was left behind after Pabst closed can still be enjoyed. I tried to capture as much as possible with my cell phone camera, which managed to suffice. Scroll down for all the wonderful details and info about the facility.

Photos above: On the left is the First German Methodist Church that Pabst owned. The ground floor contained a restaurant and the second floor was the employee assembly area. On the right is the old malt house and elevator. 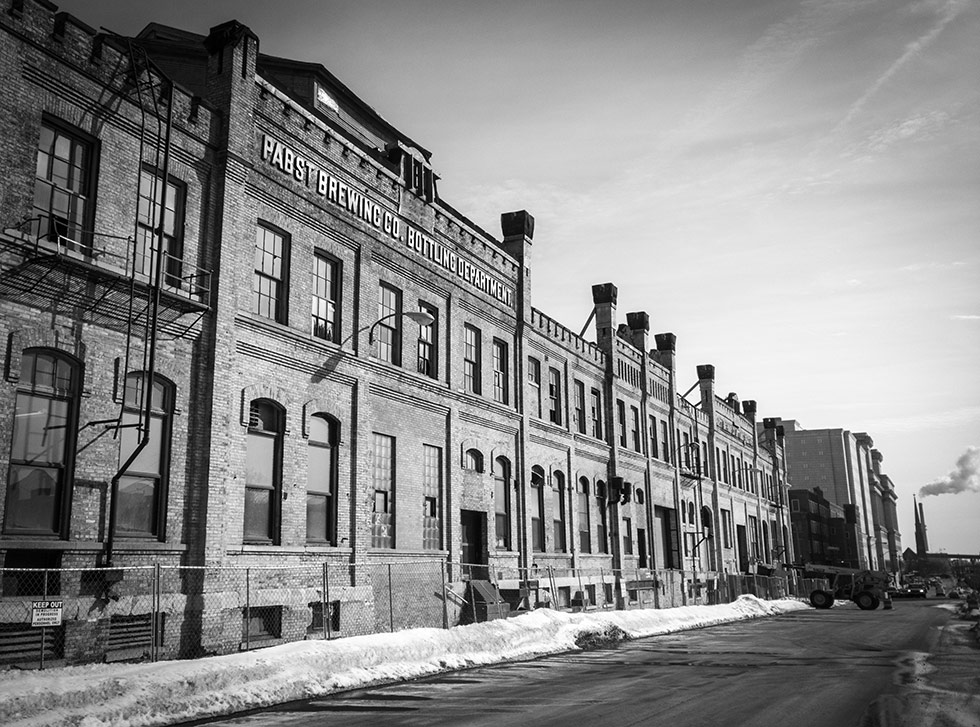 The bottling department is nearly the size of an entire city block. The interior is currently being gutted. Remember the TV show Laverne & Shirley? Well they worked at the fictitious Shotz Brewery, and many of the scenes from the opening credits were filmed inside this structure. 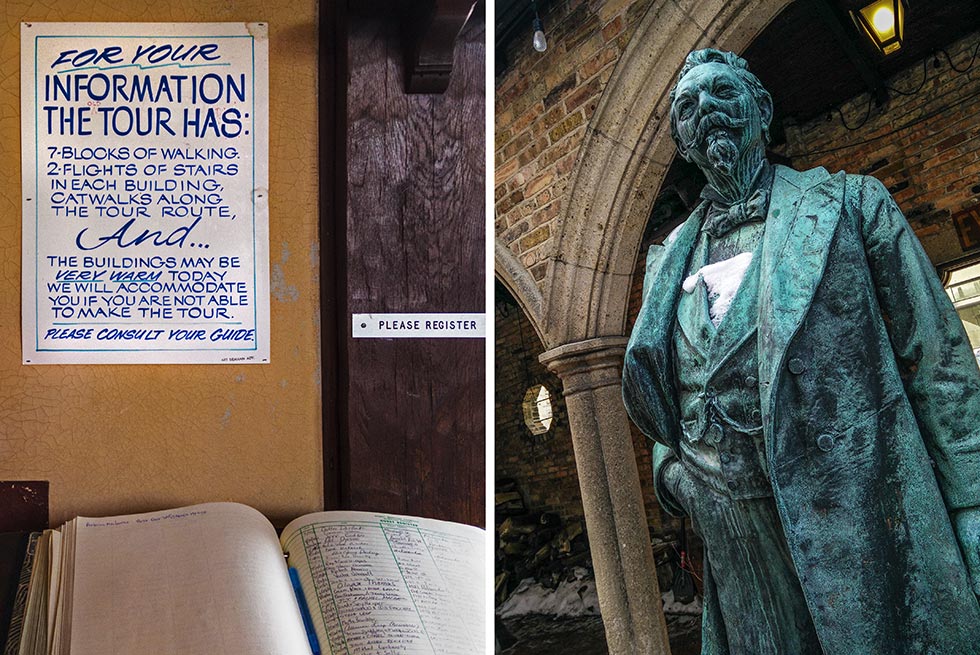 Left: The original tour room where guests could drink unlimited beer for an hour after their tour. It still contains all the old signage, and guest books dating back decades, one of which contains signatures from the entire roster of the 1953 Boston Red Sox. Right: A bronze sculpture of Frederick Pabst, who bought a share of the brewery in 1863 from the Best brothers, and transformed the company into the largest brewery in America by 1874. Pabst was a steam ship captain before getting into the beer business. 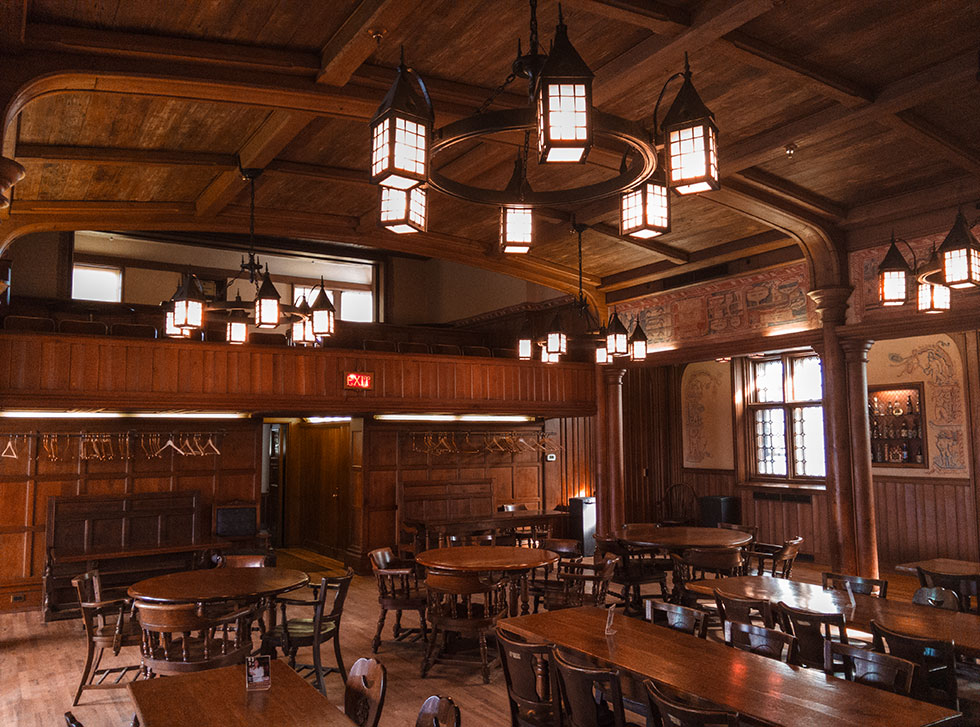 The Pabst Blue Ribbon room is where tours at Best Place begin. It was used to entertain Pabst clients and guests, and was beautifully remodeled in the mid 1940’s. It was originally a school. Pabst spared no expense. In addition to the woodwork, frescos created by artist Edgar Miller adorn most of the walls. They’re a magnificent treasure. He painted the entire brewing process, all the workers, and the history of beer, including the evolution of Pabst. The description below, from the book Edgar Miller and the Hand Made Home, provides more information. 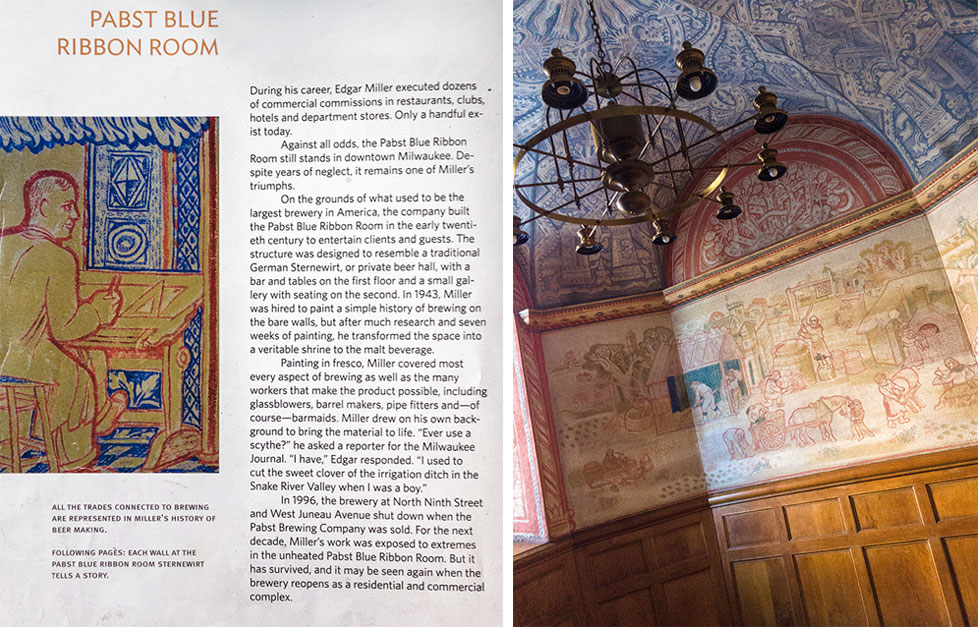 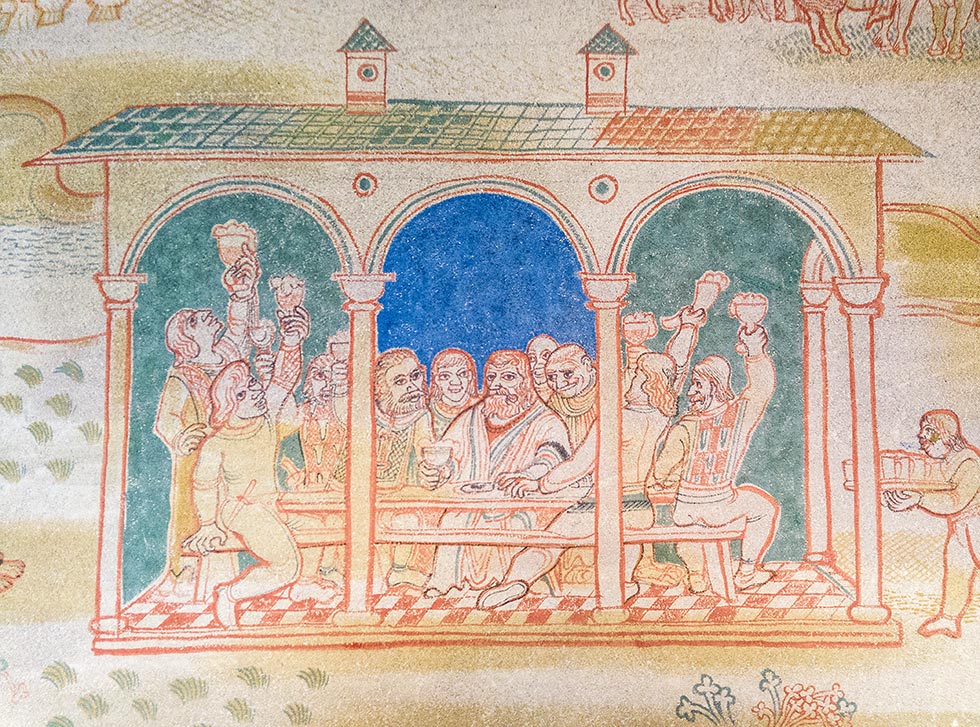 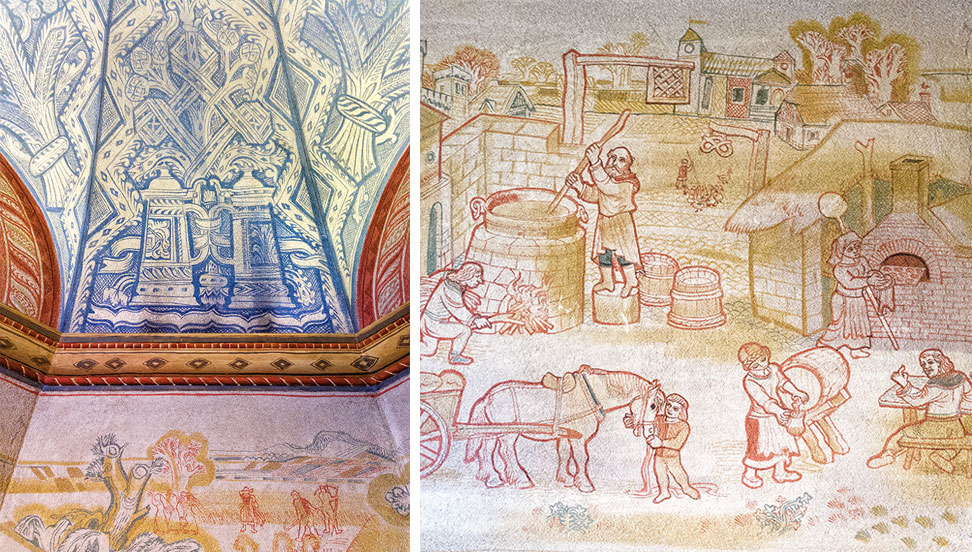 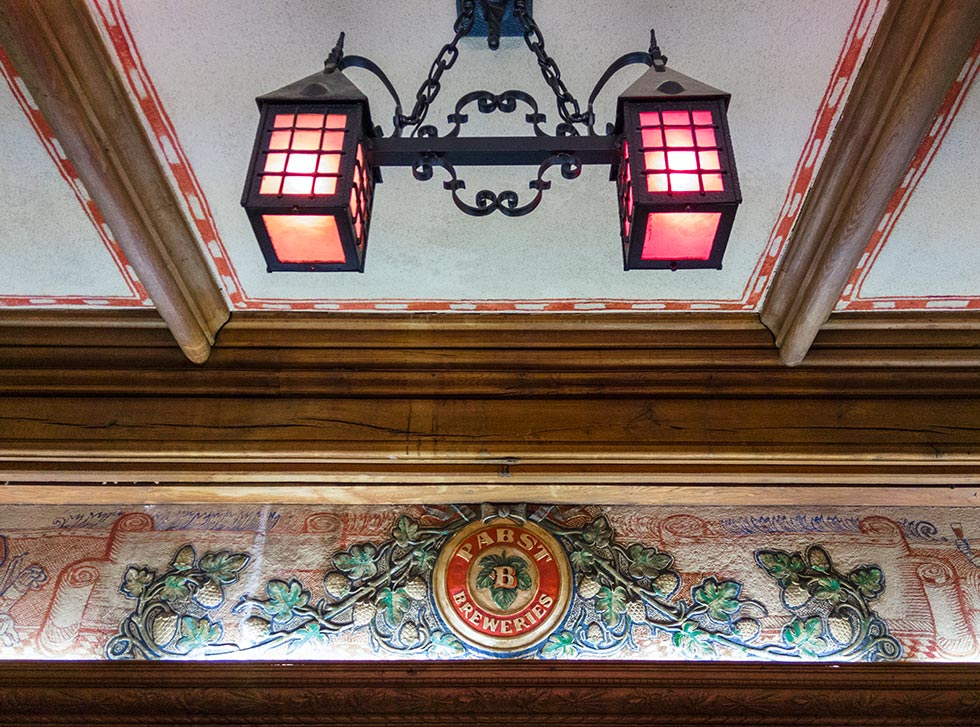 Plaster work and frescos over the Blue Ribbon Room bar. 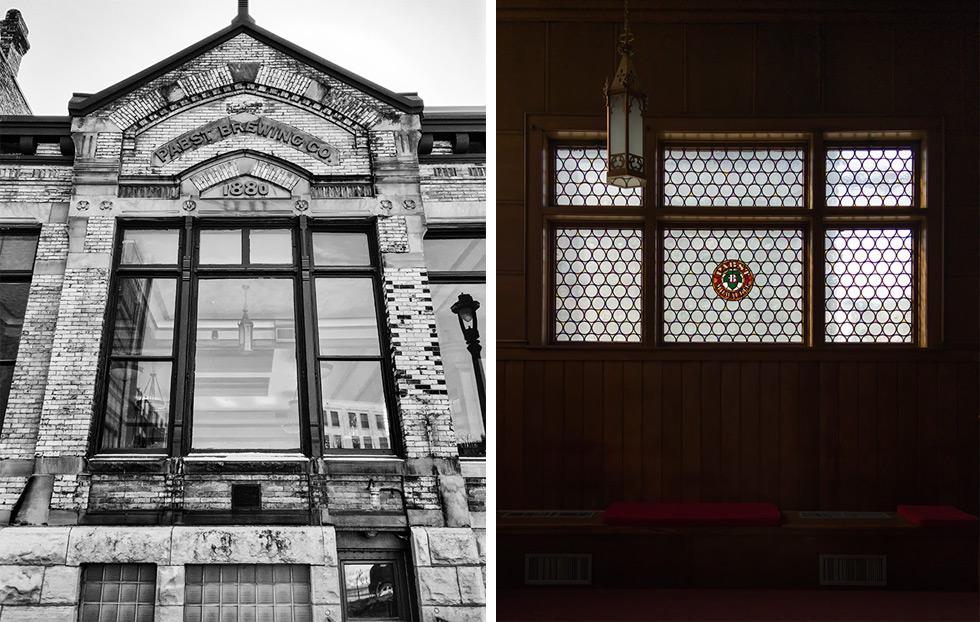 Left: The facade of the Pabst Corporate offices, dating from 1880. When the brewery closed, a lot of the contents remained, including employee medical records, ID’s, and furniture. The basement contains several room sized safes. Best Place will be transforming this area into a speakeasy style bar. Right: a stained glass window in the main room of the corporate office space. 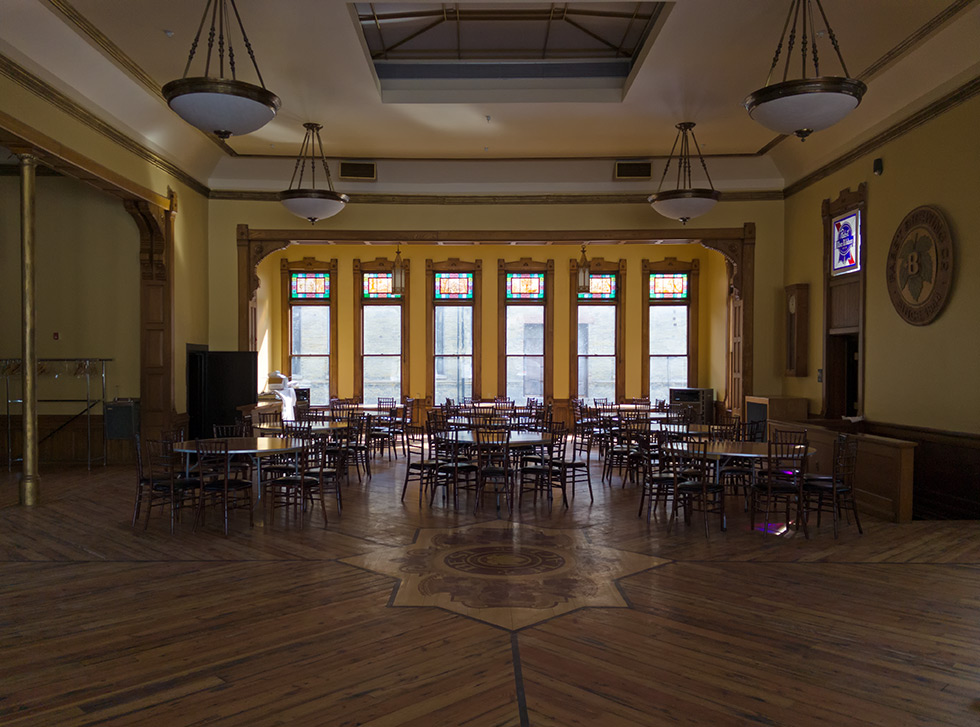 This was the main work space for corporate employees at Pabst. It was recently renovated and will be utilized as rental space for wedding receptions and other events. The floor is not original and a bar was added. The stained glass in the rear of the building is wonderful. 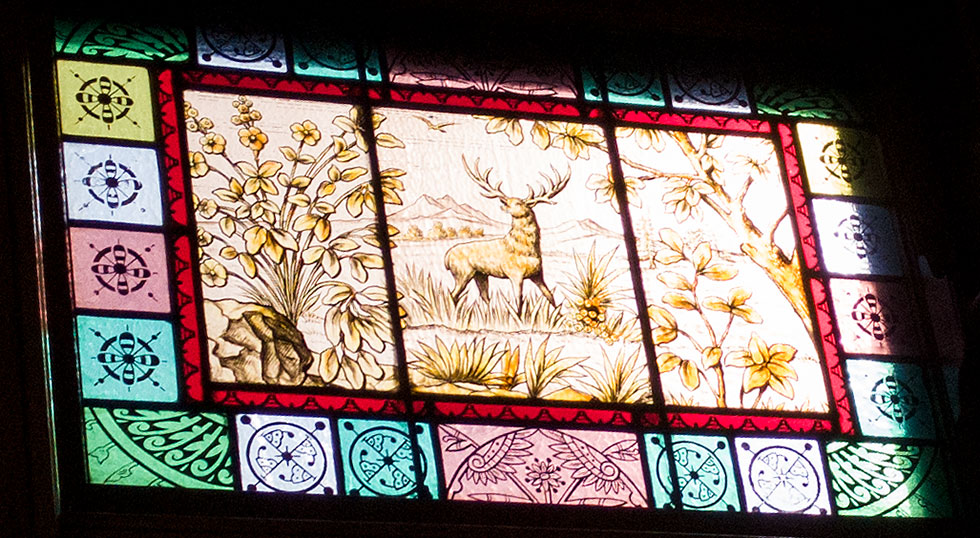 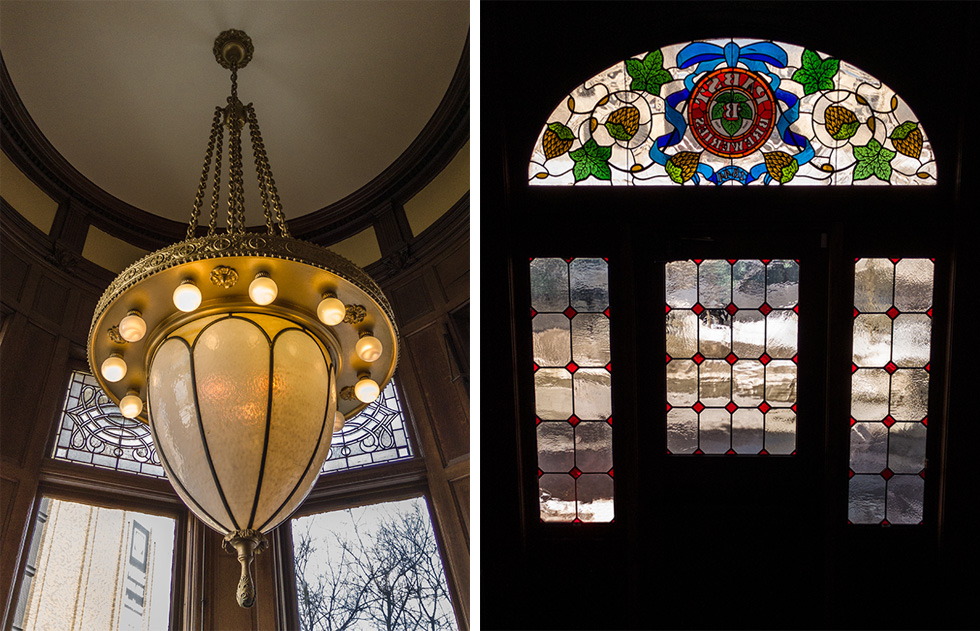 Left: The chandelier inside the office of Frederick Pabst, which is adjacent to the main room above. Right: At some point a new corporate entrance was created and Pabst decided to have these gorgeous stained glass windows created, featuring hops and their famous blue ribbon of course. 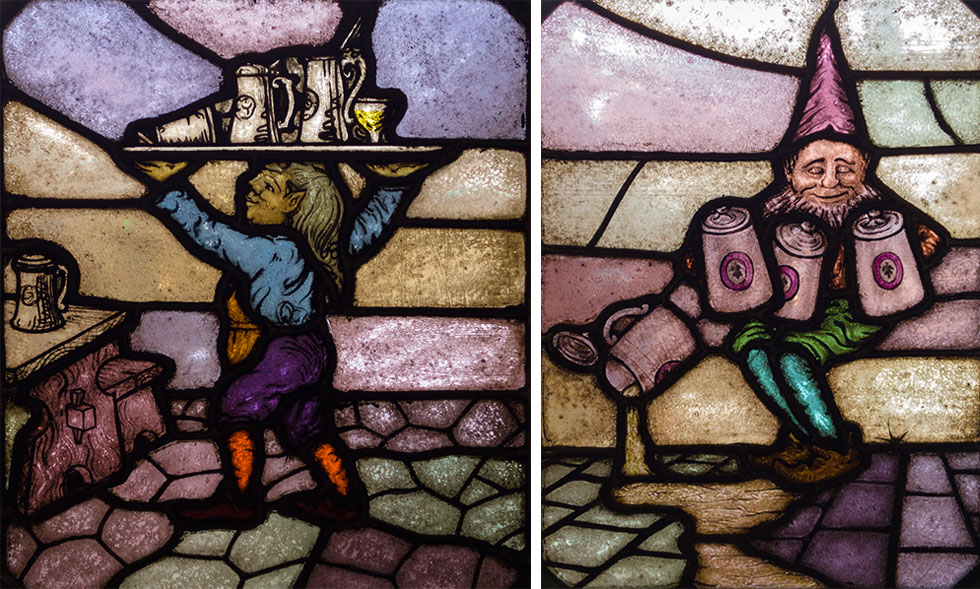 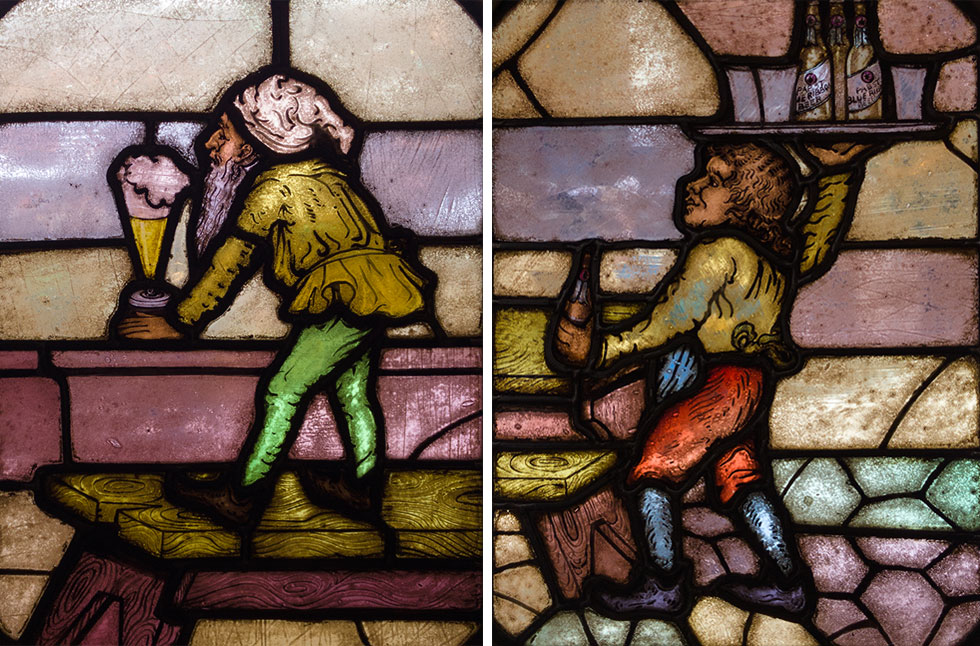 The four panels of stained glass above are roughly 1 x 2 feet in size. They’re located in the original tour room that the public would occupy before and after brewery tours. 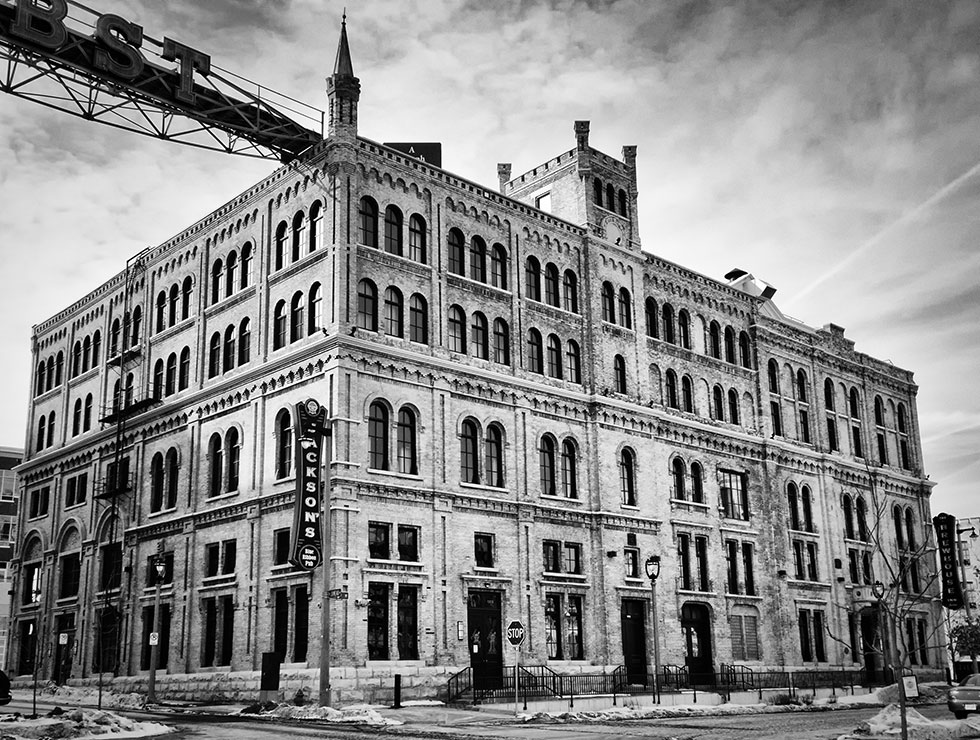 The old Brewhouse above now contains a pub and hotel, where the magnificent copper brew kettles still remain. They’re located on the second floor. The far end of the giant hall features a tremendous stained glass window featuring Rex Gambrinus, the so-called patron saint of beer. Between the long hall and stained glass, this space feels like a church. It’s a little strange to see the kettles surrounded by carpet, but it’s great that they were preserved. You can see the interior of each copper dome on the first floor. The bottoms were removed and now they act like giant recessed lighting fixtures in the hotel lobby. One of the last TV commercials Pabst created before closing in 1997 was shot in the brewhouse, and it’s hilarious. Check it out. 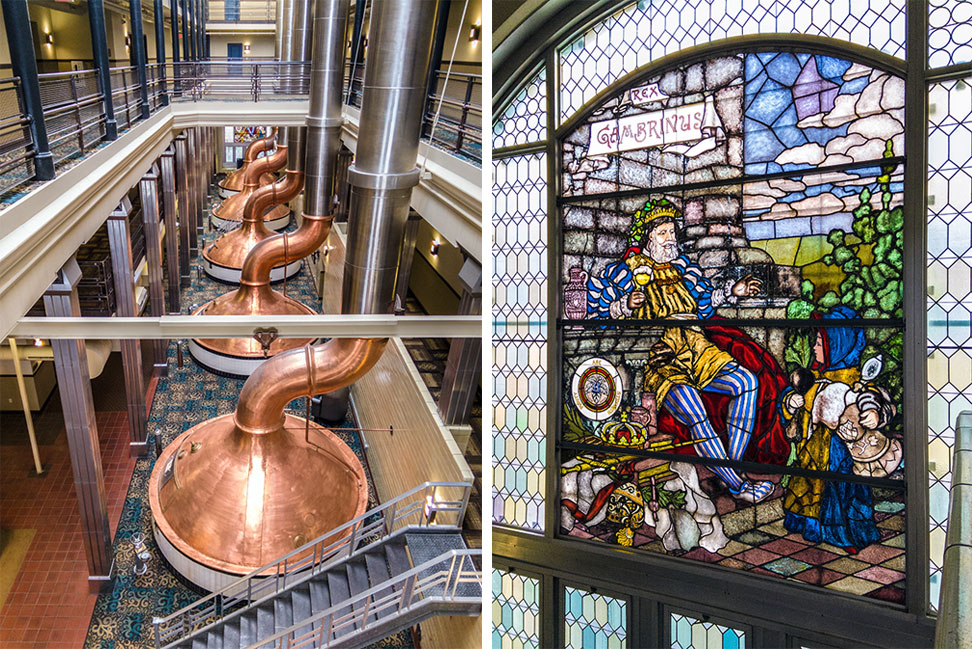