A Portrait of Rob & Kurt

It’s my birthday tomorrow and I’ve been receiving small presents all week. The latest wasn’t wrapped in a bow and arrived by e-mail. Widmer Brothers Brewing launched their new website and my photo of the founders, Rob and Kurt Widmer, was used in the history section. 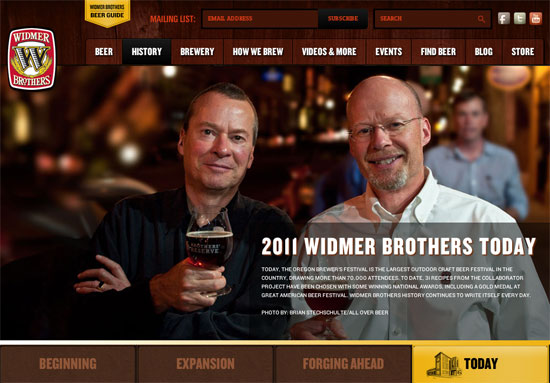 I took the photo last October during a dinner I was invited to by the breweries PR firm. Apparently, after blogging about beer for only 3 months I was considered a member of the media, which is still an odd notion to me.

The event took place at Maverick restaurant in San Francisco and celebrated the release of Widmer’s new Barrel Aged Brrrbon beer. They paired it with several yummy plates during a five-course meal. I wrote about the evening and a personal tour I received of the Portland brewery over at All Over Beer.

The photo was taken during an intermission. It was an unseasonably warm day and everyone spilled out onto the Mission District sidewalk. Quite a few establishments in the city don’t have air conditioning since we’re perpetually cooled by the chilly Pacific Ocean.

I used my 35mm prime lens, which is great for portraits and low light without flash. My only gripe about the photo is the figure walking towards the camera in the background. He’s a bit of a distraction, but otherwise the bokeh is great, it’s casual and their gaze is locked into the lens.

Here’s the original for comparison. Their design firm did a little editing on the left side by removing the cars and darkening the background.