It’s starting to get dusty around here. Cobwebs are gathering on the pixels and tumbleweed is rolling through the html. The advent of BayAreaCraftBeer.com has kept me busy. I’ve been slinging CSS code, punching special events into the calendar (thanks to SF Beer Week), trying to keep up with notable news and doing a little event planning on the side. At times I wonder what the hell I’ve gotten myself into, but feedback has been positive so the beat goes on. 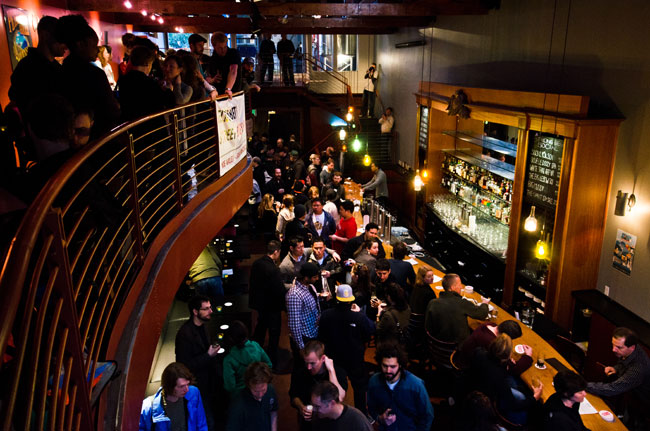 As I mentioned, SF Beer Week is kicking off on February 11. It’s a week chock full of beer tasting, dinners, and debauchery for those who get carried away. I’ve overheard more then one person planning vacation around the 150 plus events. If you run a business offering hangover cures you better blanket the Bay Area.

When I was hatching the new website I decided to get in on the fun and plan my own event. It would be good publicity, but I also wanted to give back to the community. During the six months I’ve been working on this website I’ve met some wonderful brewers that have graciously shared their time, beer and thoughts with me.

After picking my brain and throwing out the bad ideas, I decided to organize an event for the small-unlicensed nanobrewers in the Bay Area. Essentially homebrewers, men and women, who’ve been toiling away in garages and on back porches making beer they aim to one day sell, but for now give it away to friends and craft beer geeks like me. My story featuring the guys at Pacific Brewing Laboratories is a good example. SF Beer Week doesn’t include them in the mix and for good reason, not many venues want to host unlicensed brewers and serve free beer.

With this in mind plans called for a simple affair. I would invite six or seven brewers to share their beer and con Bryan and Patrick into hosting the event on Clara Street. Space would be precious but I wasn’t expecting a mammoth crowd. My goal was to simply bring them all together for a meet and greet and if we attracted 50 folks for free beer then success would be achieved.

The week’s calendar deadline was looming so I got in touch with Rich Higgins, president of the San Francisco Brewer’s Guild and SF Beer Week puppet master. When I told Rich about my plan it struck a cord. He had a similar event in mind and suggested we collaborate. Of course I immediately accepted. In addition, he wanted to host the “festival” at Social Kitchen & Brewery (SKB), where he’s also the brew master. Rich is a very busy guy. Voila! The event was instantly elevated to another level: bigger venue, more brewers and ultimately more fun.

Rich and I met once to square away the fundamentals. We decided to invite nine homebrewing operations to serve beer on February 13 from 5 to 9pm. Attendees will pay $15 at the door and will receive a commemorative glass, 2 tickets for strong beer from SKB and unlimited samples from 510 Brewing, Beltane Brewing, Bosworth Brewing, Elizabeth Street Brewery, Local Brewing Company, Orange & Black, Pacific Brewing Laboratories, Petaluma Hills Brewing Company and Van Houten Brewing.

Most of these details were easy, but the event title was a little more problematic. What would be descriptive, distinctive, and ultimately not lame? We settled on the Breweries of Tomorrow Nanobrewery Festival. It’s a bit of a mouthful, but we think it works. After that little hurdle Rich took care of the legalities and discussions with SKB management while I reigned in the brewers, crafted the press release, designed the logo and chose the glassware. 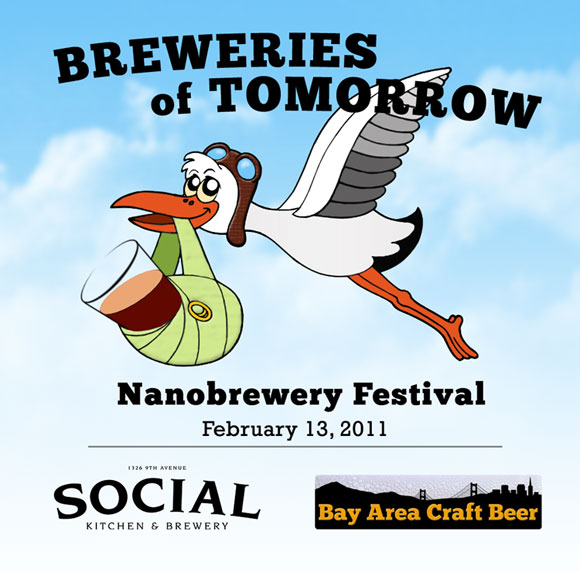 Yes, it wreaks Disney, but its fun. I wanted to avoid the usual clichés: twisting hops, feathery grain and beer barrels.

So this is where I currently stand and now you know what’s been keeping me away from All Over Beer. I have a few stories in my back pocket, which I’ll share in time, likely after I recover from SF Beer Week. If you live in the Bay Area please do stop in for the fun.