Sour Beer at the Jug Shop

I think I’ll be a regular at the Jug Shop in Nob Hill. They offer a steady stream of quality beer tastings and I dropped in for the first time on Friday for part one of their Sour Beer Fest. I’ve only enjoyed a handful of sour beers, a few Belgians (the experts), selections from Russian River Brewing Company, and the upstarts at Jolly Pumpkin Artisan Ales in Michigan, whose lineup triggered my recent epiphany. I was essentially going to school and wasn’t planning on covering the event (there’s a fine line between blogging and simply enjoying), but after giving my tongue a sour bath the incredible lineup deserves a mention.

The tasting was $30 (online) for 16 different samples of fruit beer from Norway, Belgium, Italian, and American breweries. I was a little leery of taste bud overload, but the opportunity and price was too good to pass up. Buying all the bottles, if you can even find them, would cost nearly $270. Here’s the complete lineup in the order they were served:

After the seventh sample my stomach started turning over in knots, but I pushed on for the remaining hour. My hands down favorite was the Avery Depuceleuse. The aroma and flavor contained a rich earthy funk and the sour cherries were well balanced with spice and wood overtones. This very limited release is now only available at Public House in San Francisco.

Next week part two of the Sour Beer Fest will feature more barrel aged sour beers infused with Brettanomyces. If you want to learn more about each selection, here is a pdf (link) containing the descriptions and tasting notes the Jug Shop provided. 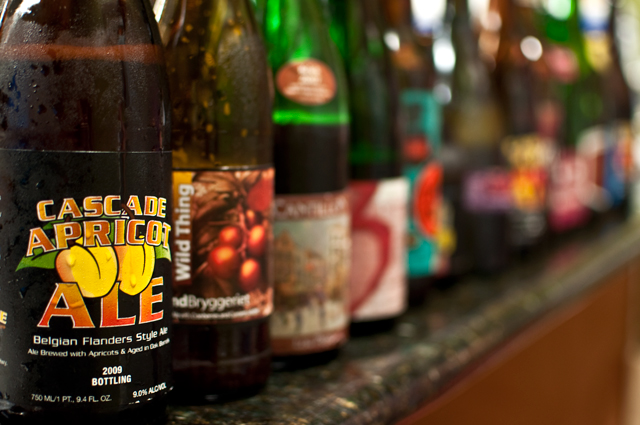