Widmer Brothers Brewing in Portland, OR, hasn’t been on my radar since I converted to craft beer 10 years ago. At parties I’ve snagged a stray bottle of their Hefeweizen and enjoyed it on tap in far-flung bars with limited options, but until a few weeks ago I struggled to identify three of their brands. Specialty stores in San Francisco don’t seem to carry Widmer and at Safeway its proximity to flavorless lagers doesn’t cultivate my interest in the brand. Like any other beer fanatic I’m attracted to the new or unusual, but I would be remiss not to keep an open mind.

A couple weeks before my pilgrimage to Oregon I was caught off guard by an invitation to dine at Maverick in San Francisco. Kurt and Rob Widmer were hosting a beer dinner for the media in celebration of Brrrbon, their latest release in the Brothers’ Reserve series. The event was occurring after my trip so I requested a tour of the brewery. To my surprise, Rob Widmer would be my guide. I was excited about both opportunities. My knowledge of the company and their beer selection would be vastly improved.

The Widmer complex is indicative of the 7th largest brewery in the country. The facility extends over several blocks in four buildings that tell the story of the companies history since brewing began in 1984. The original brick building is a historic structure they renovated now containing their Gasthaus pub. An addition north of the pub holds a 40-barrel brew system built in 1990, while east along North Russel a series of storefronts from the early 20th century contain offices. The biggest building sits across the street and is responsible for launching Widmer, with help from its Hefeweizen, into the upper echelon of the craft beer market. Erected in 1996, the contemporary brew house soars above the light industrial neighborhood and contains a 250-barrel system and bottling line. This was the primary location of my tour.

I met Rob Widmer near his office where customers were picking up kegs for the sunny weekend. I felt a bit awkward at first. Rob’s a busy guy and I didn’t want to eat up too much of his time. I put needless questions aside and didn’t linger with my camera for perfect shots. The brewing system was our first stop and I was happy to learn the enormous vessels for mashing, lautering and wort treatment were all made in the Northwest. German expertise isn’t always required. Since production had ceased for the day we peaked inside the containers for a bit and moved onto the highlight of the tour, the brewing cathedral. 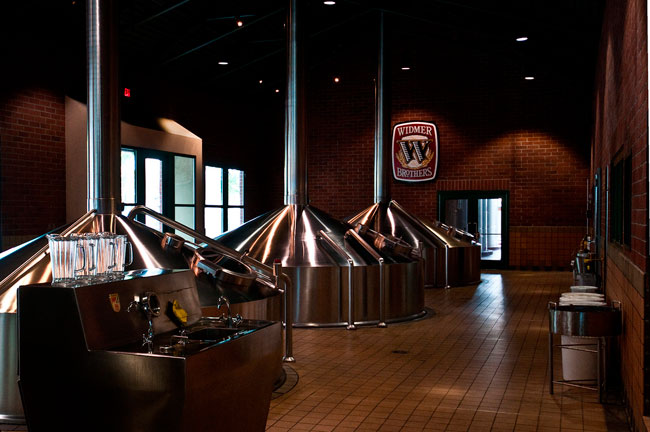 This is no exaggeration, six giant fermenters holding 1500 gallons each tower over an aisle leading towards large windows flooding the space with light. A pseudo altar is formed by several circular platforms (sites for future tank expansion) that recently hosted a small wedding. It’s a dramatic location that any loving beer geeks would faun over. 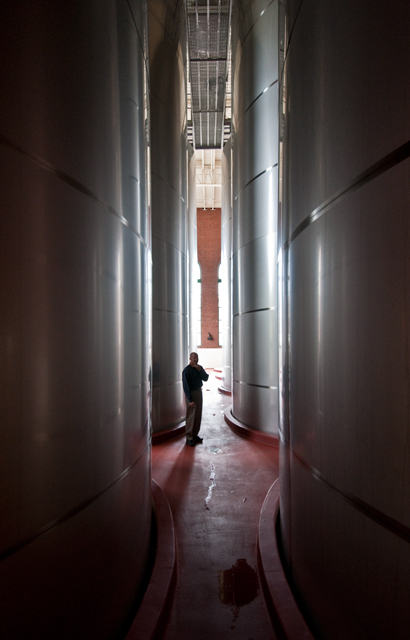 Rob Widmer in his Brewing Cathedral

After leaving the church of beer we crisscrossed the building to see the bottle line and aging room, where rows of bourbon barrels were transforming Widmer’s holiday seasonal Brrr into Brrrbon. Single use barrels were sourced from a variety of distillers in Kentucky, including Maker’s Mark. Over four months the beer extracts the whiskey bouquet and flavor while climbing to 9.4% ABV.  A rich aroma filled the room and left me salivating for a flight of beer, so we wrapped up the tour and settled into the Gasthaus Pub. 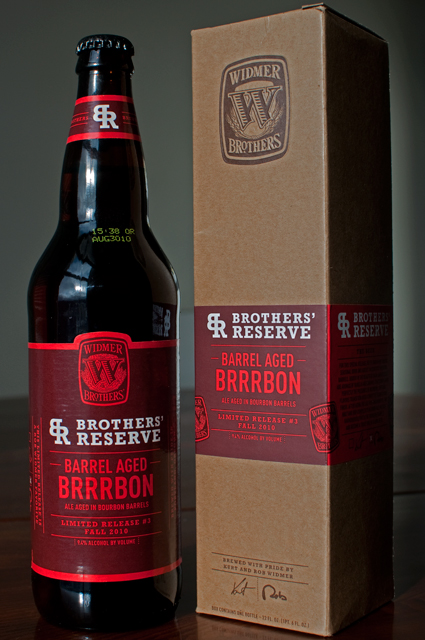 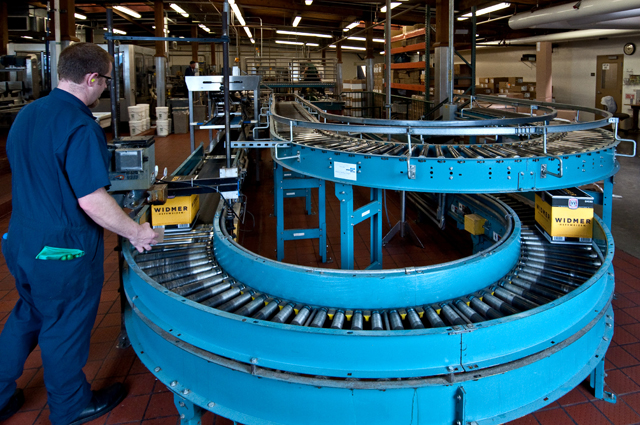 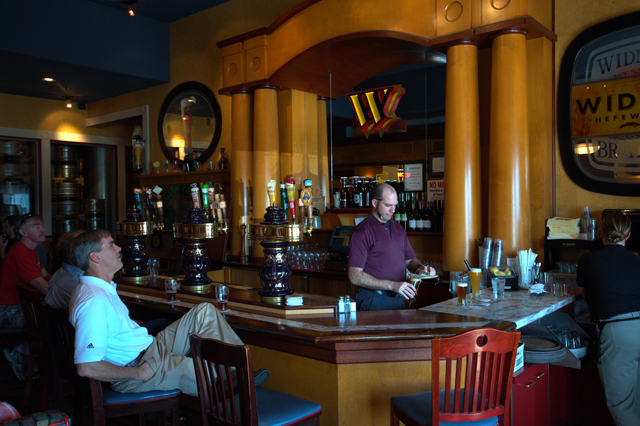 We worked our way through seven well-balanced samples starting with the classic Hefeweizen and finished with Brrrbon. Rob introduced each beer, described the flavor profile, and discussed the motive behind their creation. I just took it all in and didn’t comment much on the beer so we talked about Widmer’s Collaborator Project with the Oregon Brew Crew, one of the largest homebrewing clubs in North America. 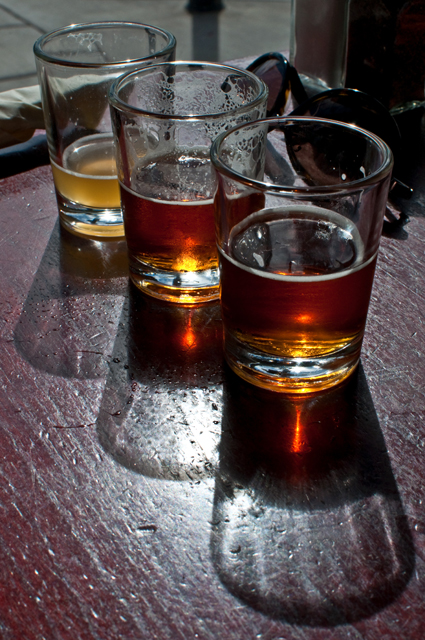 Every year Rob and Kurt invite members of the crew to submit competitive entries. Winning brewers are invited to work with Widmer on a small production batch at every step in the process from recipe tweaking to brewing and marketing. The process isn’t always easy. A 5-gallon recipe is scaled to 310 gallons and the industrial process isn’t subject to the flavor inducing variables often found in a homebrewers setup. Once everything is ironed out the beer is served at the Gasthaus Pub. It’s quite a reward and the brothers revel in seeing the homebrewer’s go from amateur to professional in the eyes of friends and family. I have to imagine its part of the fuel that drives Portland’s ever-growing craft beer landscape. 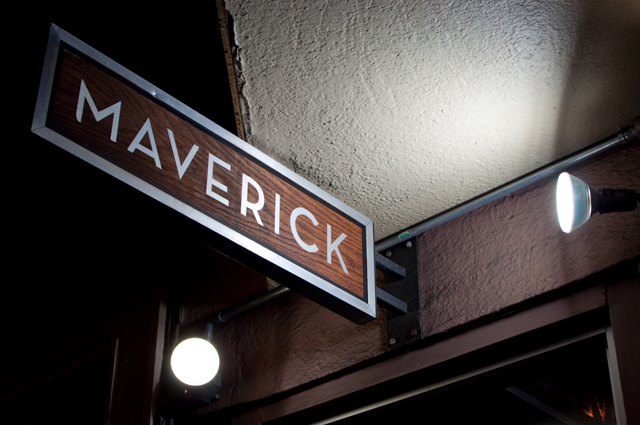 A few weeks later I attended the Brrrbon dinner at Maverick in the Mission District. It was an unseasonably warm day and I arrived to find everyone on the sidewalk. The dining room was a little stuffy so oer d’oeuvres and Hefeweizen were served in the fresh coastal air. An eclectic group of foodies and beer hounds were invited to enjoy four pairings of delectable food and beer. Rob and Kurt opened every course with brief notes about each beer and a story about its production. 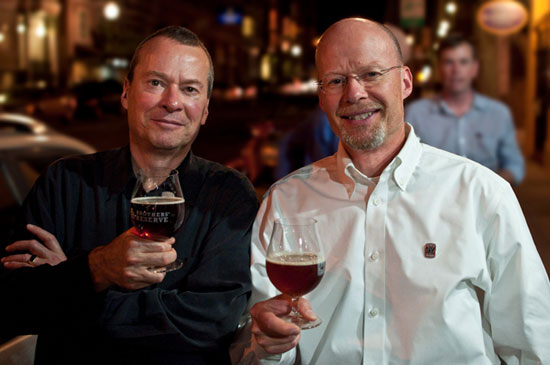 Overall each plate was delicious but some beer pairings worked better than others. The salad’s delicate flavors were blown away by a blast of hops in the Deadlift Imperial IPA. The best duo of the night was the glazed pork belly and apple slaw served with Brrrbon. The beer’s caramel tones coalesced nicely with the crispy skin and fruit, while the high ABV delicately cut the fat. The beer was also paired with a Bourbon Pecan Pie, which some may consider a better match, but I’m not much of a sweet tooth. The combination was way too rich for my taste. By the end of the night I was maxed out on beer and food. The dinner was fun and I enjoyed talking with the other bloggers and Widmer representatives. 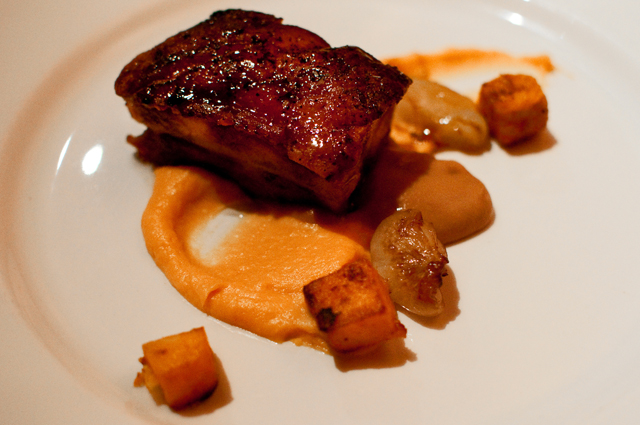 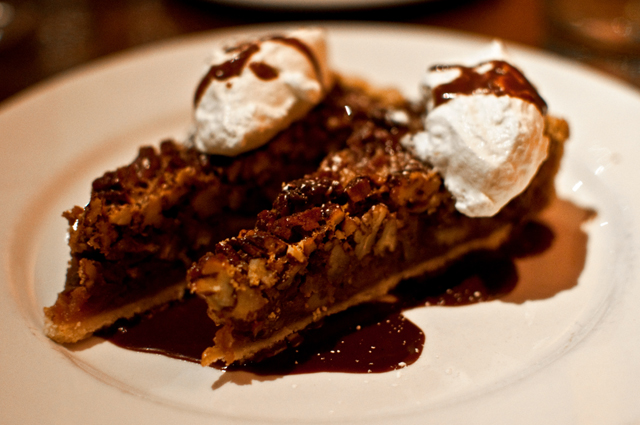 In the end, my tour, tasting and dinner felt like a crash course. I tried a large selection of Widmer beer and have a much better picture of the company. Most of their offerings left me satisfied, but some were more enticing than others. I gravitate towards beer with strong flavor pushing boundaries, and the Brothers’ Reserve series fits the bill. Hopefully they continue down this road and risk averse shareholders stay out of the way. 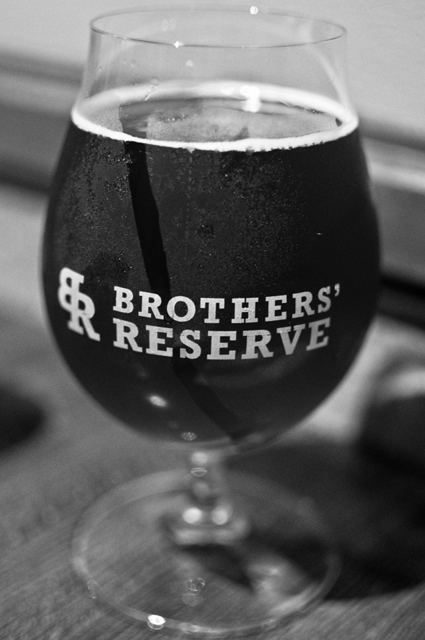